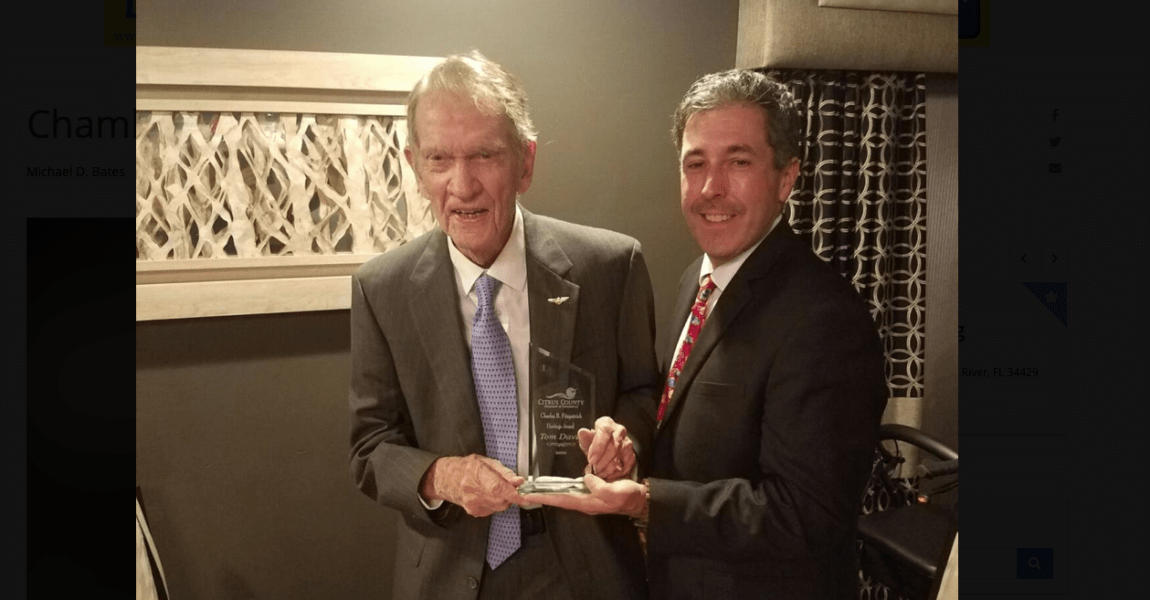 As a candidate, I’ve been on the front page of the paper a bit lately, but just over a week ago my dad made it back to the front page as the honoree of the Charles B. Fitzpatrick award. Given out by the Citrus County Chamber at their annual gala Pillar Awards, it’s for “making a significant impact on the quality of life in Citrus County, with a lifetime of service and community involvement.” The media and accolades are not important, but what underpins it most certainly is. He’s been honored periodically through his life, from his 33 years serving in the US Navy, to his (now) 42 years shepherding an international flight school and driving the development of Crystal River Airport – Capt Tom Davis Field.

He’s 93 now, with some decent back pain that finally caused him to stop flying less than a year ago, but he’s still there with wisdom for the new owner of he and Gudi’s flight school, and for anyone in the county who wants guidance on the future of the airports in Citrus, the immense benefit they convey, and the issues at hand. And yes, he still goes to “the office” (airport) several times a week.

Here is the bio/speech provided to the Chamber for the awards ceremony:

Honoring Tom Davis, honoree of the 2020 Charles B Fitzpatrick Award

This award recipient’s impact on the county has many angles, but the three that stand out are

It won’t be long in this speech before it will become apparent who this is, so I will jump right to it, and say it is my honor to present the Charles B Fitzpatrick Award…. to Captain Tom Davis.

After two wars, a chest full of medals, and 33 years as a US Navy fighter pilot, you’d think Tom would take a well-deserved rest. No, two days after retiring, he started a flight school at Crystal River Airport in 1978, taking over the county airport lease a few years later. It was then that he began tirelessly working with federal, state and local government to obtain grants and other sources of funds to further develop the infrastructure, taking it from a dirt runway and a single hangar to paved runways, instrument approaches, and quintupled hangar space. The flight school became internationally well-regarded, hosting students from 59 countries to date.

That infrastructure has led to incalculable economic benefits and enabled businesses to stay, expand, or move here specifically because their business aviation needs are met.

Perhaps the most notable way Tom has made his mark in Citrus is on the next generation. In 1992 he instituted the Kirk Scholar Award, which each year has awarded private pilot training to a high school senior in Citrus County. Currently that’s roughly 8,500 dollars, and you’d be hard-pressed to find any college scholarship that remotely approaches that figure.

In 2013 Tom became the rarest of Americans, having the Crystal River airport renamed after him while alive, reportedly sharing that honor only with George H. W. Bush’s airport in Houston, Texas.

Please join me in congratulating Captain Tom Davis, recipient of the 2020 Charles B Fitzpatrick Award, for making a significant impact on the quality of life in Citrus County, with a lifetime of service and community involvement.

Please forgive the odd video – it was a surprise, so a phone camera was set up (thanks Steve!) surreptitiously to capture him receiving the award.

“I could not have imagined how meaningful this award has turned out to be in my life. It led to a career in aviation, and receiving the scholarship and becoming a pilot continues to be a source of pride and accomplishment for me.

None of this would have been made possible without Tom Davis. His leadership and desire to create this opportunity reflects his values. This unsolicited goodwill gesture, designed for the sole benefit of others and a love for aviation, is what I know of Tom Davis. I sincerely hope that Tom sees that the giving seeds he planted have prospered and bore fruit.”

As a senior in high school, CAPT Tom Davis took a chance on me with a student flight scholarship. Between year-round commitments (sports, a job, and family considerations), they challenged me to make time for a passion I wanted to develop into a career. I faced a lot of personal challenges in high school and, like most young kids, tried to find something as an escape. The men and women at the Crystal Aero Group became like a second family to me. Tom had created an environment where anyone from around the globe could study flight and seek solace in the skies. He had a welcoming demeanor and a skill in the cockpit that was both beautiful and intimidating. I remember my first check ride with Tom. I was scared! I thought—this is it. If I don’t pass this check ride, I can never show my face here again. We were recovering from unusual attitudes. It’s a simple step-by-step recovery and the pilot needs fractions of a second to get their bearing. I loved the thrill of them, but I’m sure my facial expressions betrayed some of my fear. Tom tested me, then demonstrated to show me how I could perform better. I learned more from him in that one hour flying than he probably realized. He was cool under pressure, provided constructive criticism, and allowed me to safely make mistakes to learn and grow. That’s how he leads and that’s how today, as a captain in the U.S. Marine Corps, I try to lead. I think of his grace and commanding presence in the cockpit and remember how 17-year-old me was in awe. Tom gave me a start in pursuing my passion when he welcomed me into his aviation family; he showed me how to be a competent and graceful leader; and continues to inspire me today in my nearly 10 years of military service. Thank you, CAPT Davis.

Growing up, I always admired my grandfather for his service in WWII as a fighter pilot. All his stories that were passed down was what pushed me to want to be a pilot, but if it was not for the John E Kirk Scholarship, it would have not been possible. Maybe it was the fact that my Grampy, Captain Edgar Davis, held the same name as Captain Tom Davis, or maybe it was my immense want to fly, but either way the scholarship committee decided I was the right fit. Through this award I was able to get my entire Private Pilot’s license a couple weeks before I graduated high school.

From there I came to Georgia Tech in Atlanta, Ga where I found the Yellow Jacket Flying Club. Here at the oldest flying club in the nation, I kept up my hours and flew with very experienced pilots. Now I am the VP of Membership at the flying club and am in the Air Force ROTC program with hopes to commission into the Space Force to be an astronaut.

All my dreams of living up to my Grandfather’s legacy have fallen into place all because of the Kirk Scholarship, and I am forever grateful. 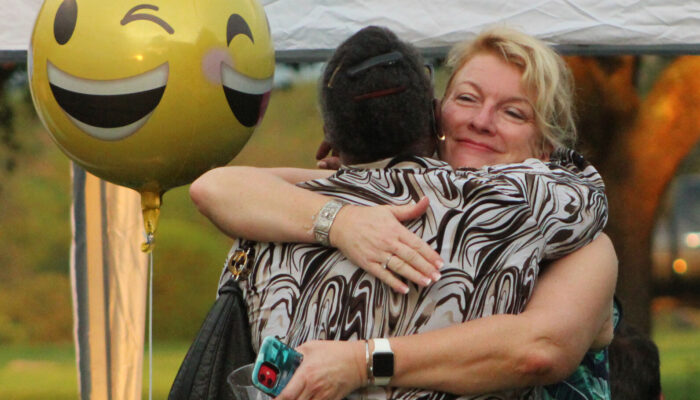 We Did It! (and Swearing-In Info) 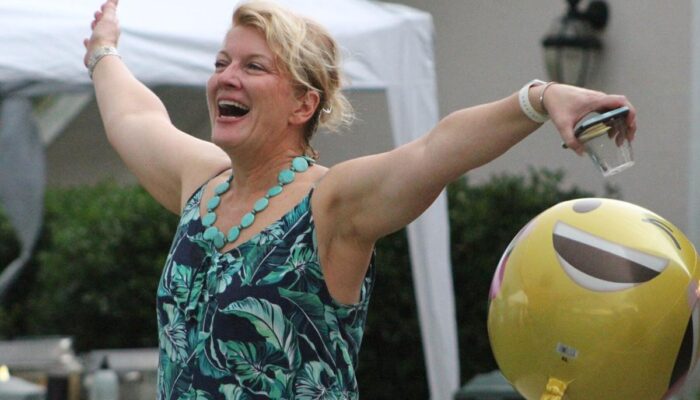 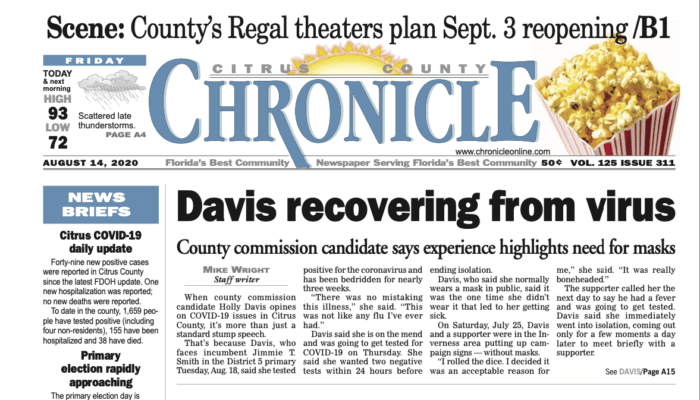